Fall and winter months not only bring cooler temperatures, they also spark the return of pumpkin spice. Almost overnight, social conversation about pumpkin spice, both positive and negative, explodes!

KS&R’s SIX Team hypothesized that the pumpkin spice craze might have gone as far as it can — and that businesses might be wise to consider moving away from creating new products that feature the pumpkin spice flavor. To test the theory, the SIX Team analyzed social conversation to learn if excitement about the flavor is dying down.

What is surprising is when the social conversation begins — especially when you compare the number of mentions in 2014 versus 2015. In 2014, the conversation began around late August. However, in 2015 people didn’t wait until late summer to post about their pumpkin spice obsession; the mentions started to spike in Mid-July.

In general, the social conversation around pumpkin spice is positive. Enthusiasts use words like “obsess” and “love” to describe their favorite flavor. There are some who are less than enthused about the flavor, but they appear to be outweighed by the lovers, at this point. 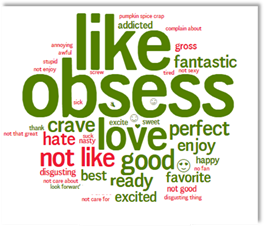 Based on this analysis, businesses should strongly consider continuing to roll out new products that feature the pumpkin spice flavor. The additional opportunity uncovered is that these product launches don’t need to wait for fall, and can consider an earlier launch to get out in front of competitors.